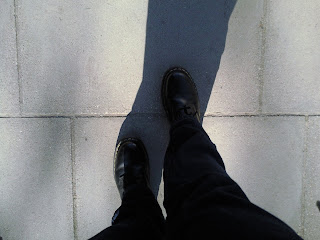 Off to the pet shop.

Got to get my rabbit some treats because I ran out of tasty snacks and he's not happy. He's stamping like a metal press because he's had his diet restricted to hay, grass, carrots, apples, celery, lettuce, my wife's Crocs, the skirting boards and some books.

You wouldn't think an angry bunny would be capable of waking up an entire house, but they can occasionally find a resonating sweet spot and stamp so hard you'd think you were being raided by the Lagomorph Anti-Deprivation League, smashing their way into your home with a carrot-shaped battering ram and demanding you reinstate yoghurt drops as a staple of your rabbit's diet.

Not wishing to anger the floppy eared extremists (rabbit feet aren't so lucky if they're kicking your head in en masse), off I go to town.

I recently had a discussion with a friend about the decline in some ethereal quality called community spirit, or neighbourliness, because these days people have very little to do with each other where they live. Rather than chat over the garden fence like in the old days (whenever they were), people stay inside and communicate over vast distances.

Apparently, this is seen as a bad thing.

I agreed, at least superficially, but it got me thinking. You're forced to communicate with neighbours because of geographical necessity, whether or not they're Nobel prize winners for surf science or Pitt Bull breeders with mattresses on the lawn. You have no choice. In contrast, technology has enabled us to strike up conversations with people of similar interests to you, all around the world, which must make for more stimulating interactions surely?

I've lived and worked round here for about 12 years now, and am slowly getting to know the eccentricities and stories that are probably typical of small towns up and down the country and beyond. All of human life is here.

Do I know my neighbours?

Almost outside the gate, I see June drive past in her elderly but much loved Golf. We wave at each other. Half my kids outdoor toys, like his sandpit and scooter, were donated by June, and she even re-upholstered a tiny armchair for him as a present. It looks like a professional seamstress has done it and has pride of place in our living room, where my boy practises his lounging.

One house down, I meet Edna, a 78 year-old who lives in our street and appears like a wraith at her gate, usually clad in the longest padded jacket I've ever seen. It's got a huge hood, is brown and goes right down to the ground (the whole coat, not just the hood) like a sleeping bag cut open at the feet so she can walk. It looks like it might have been discarded from the costume department of Star Wars for being too mad.

Pettily, I try to pretend I haven't seen her, but only because she's ever so, ever so dull. I mean, really quite monotonously boring. And she mumbles like she's got a mouth full of Ferrero Rochers and wants to savour them.

Fascinating coat or not, I have no desire to enter into prolonged intercourse with her, and for this I am a little ashamed. The problem is, after I've made the mental effort to translate her strong, mumbly welsh . . er . . . brogue (why do the Irish get a brogue and everyone else just gets an accent) it turns out she hasn't actually said anything interesting. She will talk about a stick of rock she once had for days. I find myself smiling and inserting "Well, nice to see you . . ." into every sentence to facilitate my escape.

Bill rescues me. He's a similar age to Edna and waves his stick at us, crossing the road to say hello.

I say rescue but actually I would rather avoid talking to him as well.

But everything is a source of complaint to Bill. The weather? "Terrible. Can't wait for summer, but that won't last." His heart? "The doc says it's angina, but I think it''s really about to stop." His family? "My son's moved back in with me. It's very annoying." His car? "A Toyota. Went out on it's own yesterday and never came back."

The first crocuses of spring that have stoically battled the inconsistent weather to raise their delicate, seahorse-like heads above the half-frozen ground begin to wilt in the gardens around us as Bill saps their positivity with his complaints. Edna mumbles agreement. Possibly.

In contrast, 93 year old Les then yomps past us, the only impression that he's nearing his century is a small limp he didn't have last year. He's always immaculately dressed and can be found tipping his trilby to ladies two thirds of a century his junior and making them swoon a bit, my wife included. I see my escape route and say "Oh, Les, I was after a word." and leave Bill and Edna complaining and negating respectively. I imagine they're moaning about having to pretend to take an interest in me.

Les is a local legend. He bought his house round the corner as it was being built in 1939, knows everything about the immediate area, and has even had his memoirs published. I would buy it but I don't want to look like I'm a sycophant or anything. And he's probably made half of it up anyway, because I'm only 38 and can barely remember what day my birthday is, so I'd just get jealous of his recall.

Maybe I ought to write a memoir as well?

Possibly not. It'd be full of half-remembered facts like the time the Dalai Llama phoned to see of I could take out some crack Chinese assassins because I was the most qualified camo ninja for the job, and as a westerner in an eastern country I wouldn't get noticed as much.

And as to whether I succeeded?

Les and I avoid eye contact with Mr Tourette's, the Colourful Alcoholic and his intermittent beard. The beard is either fully hirsute or clean shaven, never any stage in between. Fruity language erupts from him like a foul-mouthed volcano, along with energetic V-signs to passing cars and pedestrians. He doesn't do it so much to me anymore because I growled at him when he swore in front of my son.

This shows some semblance of control, and because I don't think Tourette's is a respecter of self-preservation I don't actually reckon he's got it. He just fucking loves swearing.

Les tells me he expects sponsorship for his next abseil down the Eagle Star building in Cheltenham*. I check the slight limp he has now, work out the odds of him doing another one and heartily agree to a tenner. I would chat more with him, but I can't keep up.

We live in an area which is predominantly inhabited by older people, like Jo, who waves through her window at me. I do my usual miming routine to see if she wants anything from the shops, which involves me moving my arms about randomly and mouthing "Do you want anything from the shops?" She gets the message and shakes her head. I wander off, happy that I'm not going to be loaded down with Ribena and packets of Tena Lady.

Anne is walking heavily into the road, around the corner from the canal. She's only in her early sixties and, last year, lost her husband unexpectedly, leaving her absolutely devastated. They were a couple of few words, but always, always together. Without wanting to give the impression that Anne is not her own person, she seems permanently out of context on her own.

The air of desolation about her makes it seem difficult to talk to her at first, until you realise she's not after words of comfort, because they don't exist, but just words. I have plenty of those. We exchange subdued pleasantries for a few minutes, and walk off in opposite directions.

I get to the end of the road and turn left, across the canal, to get my bunny treats.

Do I know my neighbours?

Impossible not to really.

Blimey, I've only just got out of my road. I'm going to be ages at this rate.

Labels: all of human life is here, first swear, neighbours

Apparently there's a magical, mystery way of making words appear on my blog even though they've been crafted on a mobile phone.

This I find hard to believe, because surely the only person who could blog like that would be a nimble fingered victorian seamstress, shortly before candlelight-induced myopia set in for good and she was sent to the poor house which are notorious for bad reception.

Still, worth a try.
Sent from my BlackBerry smartphone from Virgin Media

Hundreds of years ago, Dinosaurs Roamed The Earth!

Dinosaurs are always described as roaming. It's a good word, but probably not accurate for critters evolved for running, jumping, plodding, flying, leaping and disemboweling on the go.

In the cretaceous, Dinosaurs Pootled About!

It doesn't quite create the image of dynamism that paleontologists are convinced dinosaurs were capable of. You wouldn't be quite as terrified of T. rex if all it had been capable of was roaming after you. You could just amble your way to freedom.

Then, 65 million years ago, they called it a day and took up extinction.

In the spirit of recreating set pieces on a budget, I thought I'd show my version of the flocking scene in Jurassic park, complete with eerie, terrible lizard sound effects.

Rather than going to the trouble of splicing dino DNA from amber-trapped mozzies into frog cells (and lucking out with a Triceratops rather than a bloody big frog), I have gone for realism and recruited the actual descendants of the dinosaurs for the shot.


Right, I'm off to remake Avatar with some smurfs now.
Posted by The Jules at 9:04 AM 14 comments: