At work we have a number of people who are responsible professionals, with an ethical and moral duty to help folk if they can, using their paramedic skills whether on or off an ambulance.
Most of the time, this involves going to where the people are hurt or unwell, and ministering to their needs there. Occasionally, they come to us, asking for help.
Obviously, the powers that be have noticed this, and have reacted by erecting a sign to welcome them: 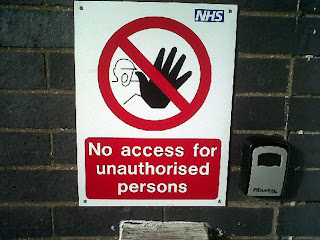 Possibly the rudest sign since the burning bush spelt out Moses Is A Cock in sparks.*

It's not the idea I have a problem with. This is an ambulance station and there are drugs and patient records on site, albeit locked away, so a modicum of security is sensible but, really, the computers are ancient, the telly is tiny, the chairs are threadbare, the vehicles are locked, the blinds are broken and the charity box is empty.

The only thing of real value I can think of anywhere on the premises are my sandwiches, and should anyone amble force their way in and try to steal them, then I would fight to them to the death. Theirs, hopefully.


Morphine? Yeah, help yourself, I'll get you a cannula.


My butties? Oh, you don't know who you're messing with.


This sign seems a bit unnecessary and probably won't put off real evil-doers intent on nefarious deeds, as we are rather limited on security guards, towers, patrol dogs, CCTV and automatic intruder-tracking weaponry (other than an elderly stray cat called Feeble, which might give an interloper some sort of skin disease, should it lean on them).


For genuine visitors, a simple piece of text asking anyone to present their ID before gaining access would surely suffice.


Is a thief going to go to all the trouble of ironing his mask and writing SWAG on his sack, sneak up to the door, put his hand out to open it and then suddenly notice the sign, causing him to have a change of heart because, ooh, that is a nasty picture, and there's a lot of red on it so, you know, they really mean it. I'd best be off.

No. All it does is be rude to anyone and everyone, no matter what they're here for.


"NOOOOOOOOOOOO access! Feck off! Shoo!  Hey! You there? Yeah, you with the haemorrhage? Are you authorised? No? Well gertcha then! Go on! There's nothing for you here."


The little jaunty blue NHS sign in the top right corner can't deflect attention from the rest of the design. A big, scary voodoo hand (possibly wearing a glove favoured by the more particular of murderers) reaches forward, looking as if it wants to rip your heart straight out of your ribcage, before showing it's quivering ventricles to you as punishment for coming too close to the front door when you're not bloody well authorised!.


But that's not the really annoying thing about the sign.


That would be the face.


Look at it. It's not even a proper face. Is that a hat? Or some sort of hair? Or really angry eyebrows maybe? And what's with the big circle in the middle. Is it shouting? Screaming?


I have seen a similar expression before, only not quite so tormented: 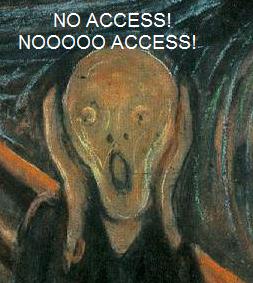 This would be a more effective sign, I think.

Actually, I may have hit on something here. Maybe all public warning signs should include a piece of classic art, so people are warned, entertained and educated, all at the same time.


I could see a Constable water scene to warn drivers of a ford ahead, or Dali's Persistence of Memory to show something might be hot. Perhaps Da Vinci's Last Supper could remind people coming out of a restaurant that this is a residential area so could they keep it down a bit, or Michelangelo's Creation of Adam on Do Not Touch signs. A William Turner jobby could be used to alert drivers to fog, or a John Waterhouse warning against serenading wispy girls near ponds.


All essential information, but delivered without threat or irritation.


I wonder what you could use MC Escher paintings for?


*Strangely omitted from the Book of Exodus.
Posted by The Jules at 8:53 AM 16 comments:

A huge lorry with a load of logs on it drives past me and my mate Dave.
"Wood you look at that." remarks Dave, lazily.
"Must be tree or four tonnes there." I reply, with equal lack of effort.
"It stems from greed, really." He says, smiling.

"I wonder if it's hard to bark up?" I say, not really trying.
"He came out of that trunk road." Dave looks sideways at me. My eyes narrow. A gauntlet has been thrown down, like some sort of glove.
"Did you want to log a complaint?" I nod, pleased with myself.
"Nah. It goes against the grain. And it wouldn't get to the root of the problem." Dave is like a verbal rapier.
My eyes dart back and forth, lips moving very slightly as I try and formulate a reply, my brain whizzing like a whirligig beetle on the fragile meniscus of a pond full of pun-fish. Leaves? Too obvious. Photosynthesis? Too hard. Phloem? Too nerdy. Xylem? Just as nerdy. I open my mouth and hope something good comes out.
"I can tell you were making a pun by the timber of your voice." Aha! Result! That's unbeatable that one! Whatcha got, Dave? Whatcha got?
"I was." he replies. "But seriously, imagine having that thing lumbering towards you."  he shakes his head.
Dave wins.
Posted by The Jules at 7:00 PM 27 comments:

I rolled in to work the other morning and took over the paramedic car from my mate Roy.

"Top o' the marnin' to ya!" he greeted me, and did a little Irish jig.

This was strange because of two things. The first being it was six in the AM, and no-one should be doing a jig at that time of the morning. I'm sure there's a bylaw that forbids it.

The second is that Roy is from Birmingham, and his Irish heritage is about as closely linked to him as his Kenyan ancestry. Judging by his pallor (and I do like to judge), that is quite a way in the past.

So obviously I replied in the same vein with an appropriately mangled "Top o' the marnin' to y'good self as well there, so it is!", proceeding to see-saw my elbows in and out which I understand to be the way all people speak in Ireland.

I couldn't help myself. It just had to be done. Upon hearing the Irish lilt,  my vocal chords suddenly became flawlessly Hibernian, as though I harked from the sprawling suburbs of Galway itself.

This, I thought, was odd. Why couldn't I simply nod and accept that he'd accented at me, maybe smile appreciatively if it was a particulalry good one, and then carry on talking in my (arguably) normal accent.

The following few days, as we crossed our finish and start times, I decided to try an experiment to see if the phenomeon was reciprocal.

That evening, as I finished the day shift, the moon was already high and bright, and Roy began his second night shift, I promptly hollered "Why aye mon, it'll be a braw bricht moonlit nicht tonicht!"

Without a moments hesitation, he answered "Aye, you're nay wrang. Icy an' all. Ah nearly hit a coo comin' here the noo!"

So, it wasn't just me then?

Roy caught on quick and, the following morning, I was met with "Guten Tag,  Englisher! Achtung, schnell, gott in himmell!"

"Nein!" he shouted back at me. "Ve haff vays of making you valk!"

That evening, I greeted him with an accent from the Deep South of The United Americas (Northern Branch), politely enquiring if there was good eatin' on squirrels, and he responded with a Californian drawl, assuring me that, in fact, gingham foot-longs with crawdads were better.

This was still a success because in England we feel there are only three US accents. These are Hillbilly, Surfer Dude, and Mexican.*

So, it appears that, should someone greet you in an accent other than your own, there is some sort of psychological imperative to respond in kind.

Try it if you don't believe me.

I guarantee it'll either be true or false. Or possibly somewhere in between. That's how confident I am in my  hypothesis.

Maybe it harks back to tribal days when one might meet a well-armed stranger and, to reduce the risk of being speared by a xenohophobic Cro-magnon type, emulating his speech patterns would lull him into feeling secure in your presence, so you could then stab him in the back and steal his fabulous sabre-tooth head-dress which is all the rage down the cave system this season.

Or maybe, and this is my current favourite psychological theory, it's just silliness.

Of course, night shifts take their toll on anyone, and the first thing that tends to go is a sense of jollity. On our last swap over, continuing the theme I think we had both come to expect and enjoy, I hailed a not-so-sprightly looking Roy with a hearty " 'Ow do, is thee all reet?", and was rewarded with an appropriate faux-Yorkshire lilt straight back.

Still, it's not the content that counts, but the delivery. My theory stands.

Thinking back, I may have come across a potential downside, as when the new Stores chap came to our ambulance station in a large white NHS van to deliver a single vomit bowl.

He came over to the corner of the garage where I was busy test-licking defibrillator paddles to say hello.

Obviously, I retorted in a lengthy, french-accented soliloquy taking, for humourous effect, aspects of Monty Python's Ker-nigg-hut insulting frecnhmen, the policeman out of 'Allo 'Allo and an onion-necklaced, beret-wearing, Gauloises-smoking baguette-eating stereotype, thus crafting them into a beautiful, synergistic combination of humour and good-natured racism.

Eventually, exhausted and bouyed by the banter between myself and my new, nameless friend, I stopped, got my breath back and introduced myself. "I'm the Jules." I said, and proffered a hand, expecting us to retun to our normal, everyday Anglosaxon now we'd got the fun over and done with.

"Herve." he replied in a monotone, but strangely keeping on with the foreign accent.

In fact, come to think of it, he's still using it, which in my opinion has gone way past funny and is starting to get a bit tiresome now. 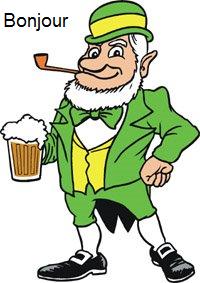 *In comparison,  Americans think that Brits have two accents; Upper Class Toff and Cockney.
Posted by The Jules at 7:15 AM 18 comments: