I found it a bit difficult to get into the old chrizmuzz spirit this year, due to work commitments making me do stuff for money on the 25th of December.


Normally you might think that an areligious type like myself wouldn't get particularly festive anyway, having quite literally the same amount of soul as a metre-square bit of tarmac with a dead squirrel on it. Literally.


But you'd be wronger than a monkey wearing a toupee, because I DO actually quite enjoy christmas, having been brought up in the pseudotraditional environs of working class England. Lights, glittery stuff and indoor conifers all break up the tedious grey monotony of the typical British winter, and I'm all for that. We need that bit of distraction.


If it weren't so, why would it have persevered for so many centuries, millennia even? There must be a basic psychological benefit in having a mid-winter jolly or else why would such a thing be adopted and adapted by so many cultures and religions that have arrived in these murky island regions thinking they're the new way of doing things, when in reality we all know they're just a rehash of some old ways of doing stuff that can't change too much because their basic unit of composition is still the human being.


Scathing about organised religion as I know I can be, I do like a bit of a knees up and the occasional present, so if that means I have to be spiritual to have a bit of fun without being labelled a hypocrite, then hand me a dog collar and pass another barbequed haunch of choir boy.


So I have missed out on the celebrations a tad, especially now I have small children because christmas is primarily about them. Watching them open their gifts on a video doesn't quite capture the full pant-wetting squeals of excitement as they realise they're allowed to play with ALL that paper, and even the toys inside if they want.


I'm not complaining really. Well, I am, but only because I'm trying to elicit sympathy despite being allowed to do a job I enjoy, which probably isn't going to happen now that I think about it.


Stir the violins! Play a maudlin tune of deprivation for me, fiddlers! Fiddle me sad and I shall darnce the Darnce of Melancholy, whilst wearing the blue Pashmina of Forlorn Despondence.


But at least we have got the New Year coming up and, if christmas is for the kids, New Years tend to be more adult orientated,. We can celebrate new starts, pretend we know more than ten per cent of the words to Auld Lang Syne and drink enough booze so that, should we collapse in a snow drift, we wouldn't actually freeze until the temperature drops to the solidifying point of ethanol. We can make solemn oaths about fresh endeavours to improve ourselves, whilst simultaneously consuming enough food and drink to smother a rhino. We can sing and dance and stay up late and party and bond and be free and above all, above all else, we can have FUN!


If anything, I'm more excited about the New Year than Christmas!

Working in a medical organisation it can be easy to forget what a big deal it often is for someone to suddenly find themselves classed as a patient. They can go from walking around happy and healthy then, BLAMMO!,  something untoward occurs and they're no longer in complete control of their lives.

The modern medical ethos is to involve the patient at every stage of their treatment if possible.

There's always the "I don't want to go to that hospital because they do crap sandwiches and my 103 year-old great Aunt died there after a boob job, so take me to one fifty miles away" patient who perhaps doesn't get all the respect they deserve, however unprofessional that may be.

Usually though, we try to accommodate the patients wishes and, for them to make an informed decision, we like to keep them informed.

So you might be surprised to learn that many people who end up in the purple-gloved clutches of the ambulance service don't want to know anything about what we're going to do to them. Or for them. Or with them. They have a "just get on with it, man." philosophy.

"I don't ask a plumber why he's wrenching that nut as long as he fixes the leak, and the same goes for you, Sunshine."

When someone tells me that, I just obey their wishes and open the sterile packaging for the medical nut wrench.

In general, though, people do want to be involved. They want to know what's going on and why you're doing it, and above all they want to talk. It helps them retain a semblance of confidence and some aspect of control when entering a strange and often unfathomable new environment.

Putting yourself in the patients shoes, not literally as that is frowned upon and results in letters of complaint, is a useful mental exercise, but there's nothing like suddenly finding yourself on the other side of the professional fence to engender feelings of empathy in the future.

So I thought I would relate the story of my own hospital admission which happened about four years ago and what I learned from it.

It all started, as many tales of woe are wont to do, in the middle of the night, when I woke up with some discomfort in what is termed, in medical parlance, my tummy banana.

Bit weird, I thought to myself, and presumed it was simply the after effects of some strong Belgian lager I'd had earlier in the evening. I went to the toilet and noticed my wee was pink.

Stylish, I thought, trying not to worry too much, but I was more concerned about the ache in my lower abdomen having not reduced at all. In fact it was a bit worse now.

I got back into bed, but started tossing.

This disturbed the missus and our new bed-sharing baby, so I got up and went downstairs.

The pain spread round to my side and crept along my back, getting worse, until the ache became a sort of cold grip that made me gasp.

I tried unsuccessfully to go to the loo again, but did achieve a new pain. A completely unrequired pain that no man should ever have to endure. The tip of my penis hurt.

"Oh come ON!" I grunted to myself, as I wondered if I should try and rub it better. "I know something's wrong, so is really there any need for that?"

The pain in my side was now worse than the worst pain I'd ever had before, when I'd gone sub aqua diving with a cracked tooth some years ago. And then it got worse!

I looked in the mirror, surprised by how pale I was.My pulse crept up past 120. I retreated back to the toilet just in time to throw up magnificently, as if my body didn't know what to do so thought it would try that, see if it worked.

Staggering to the the living room, I couldn't sit, stand or lie without the pain coursing through me, although I did at the time remember thinking how bravely stoic I was being, keeping it to myself and staying quiet so I didn't disturb my wife and new baby upstairs.

Suddenly, Mrs The Jules appeared at the door.

"Why are you whimpering?" she asked, adding "So loudly?" to make a point. Then her eyes adjusted and she got a good glimpse of me.

"Bloody hell. What's the matter?" she made a face at my sweaty pallor and took my pulse, muttering "One thirty!" and rushing off to get some paracetamol and ibuprofen. She returned and I downed the tablets like sweeties.

"A kidney stone?" Mrs The Jules finished impatiently. I nodded up at her, now bent double in a comical Notre Dame mutant campanologist pose. "Shall I call an ambulance?" she asked.

I wasn't sure a kidney stone was particularly appropriate for ambulance transfer, despite having treated many in my time. They are excruciating, but not particularly life threatening.  Also, the thought of one of my colleagues picking me up, giving me morphine and subsequently taking the piss out of me for the rest of my working life made me shudder, despite the pain. Instead, we lashed the baby into his bucket seat and made our own way to the Emergency Department.

The drive was appalling. Even my missus, who is a smooth driver, couldn't stop me clutching on to the hand hold, shaking like a dog doing it's business outside a nursery,

The pain got worse! How can it get worse, I wondered? There is no more pain to be had. Any more pain and I won't be able to think. I'll be like a . . . no simile came to mind. The pain had de-similefied me!

Of course, at the Emergency Department, there happened to be a number of ambulance personnel  who were most surprised to see one of their off duty colleagues scuttle out of a yellow Nissan Micra, bent double and sporting a dashing grey colour, and into the recpetion area to book in. A couple of them helpfully followed me in to point out how funny I looked, and would I like a poke in the ribs to see if it really did hurt, and also how funny I looked.

It was relatively quiet, and I got efficiently triaged, assessed and dosed up with morphine and diclofenac. I actually sighed with relief as the pain ebbed to a dull throb over the next half hour.

Then, three days in hospital on fluids and antibiotics, all waiting for the emergence of what I presumed to be some sort of spiky boulder as it made it's way down my lacerated ureter and into my bladder. Eventually, I went home and caught it in a tea strainer that my wife now refuses to use.

And all because of this: 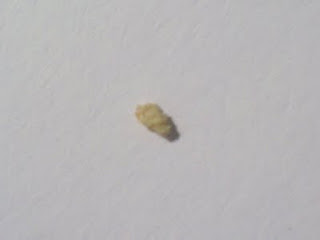 Hang on, that doesn't show the true majesty of the thing. Try this one: 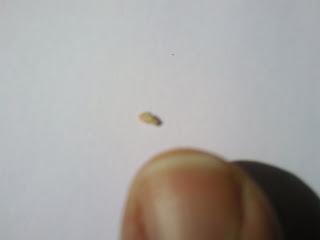 Observe the wonders of nature!

So, anyway, what did I learn from the experience?

Well, despite the best care from attentive and decent staff, hospitals are boring. Really boring. For this reason, I always tell my patients to grab a book if they can. Hospitals are also noisy at night, so take ear plugs.They're disempowering, so take a positive mental attitude.

And they're full of sick people, so take a decent immune system.

Most of all, I was reminded how thin the line is between us and them. Between the practitioner and the patient. So thin, indeed, that often it fades into invisibility.


I've been subjected to some questions by the lovely Feryx Lim over at Absolute Eloquence and Shit. Don't be put off by the fact that she's posted an interview with Yours Truly because, apart from that, there's some good stuff over there.


http://feryxlim.posterous.com/gravel-farming-is-so-much-fun
Posted by The Jules at 9:30 AM 7 comments: