Publicity is being gained for writers who have penned some prose involving questionable copulation, their reward being the honour of receiving the coveted Bad Sex Award from Literary Review.
Having only briefly perused the offenders, I was half expecting it to be about actual bad sex, maybe where one partner rests an elbow on the other's hair, or involving a nasty clash of teeth, or perhaps a mid-coitus nosebleed, but it's not. It’s just about sex.
I don’t think I’d be too embarrassed about receiving a bad sex award (unless it was from my wife), because it must be exceptionally difficult trying to be original when describing something people have been doing since . . . well, since before there were people.
So, in the guise of any publicity being good publicity, unless you're a murderer, I have decided to have a stab at it. You can insert an innuendo here if you are childish and unsophisticated.
Heh. Insert.
Picture the scene. It is one of classic romance, involving traditional gender orientation and eroticism that has appealed to both men and women since time immemorial.


___________________________
She opened wide after a single knock, and raised a questioning eyebrow at the darkly tall stranger standing before her.
"I have come. . . " he growled deep in his throat, a testosterone fuelled baritone that she could feel in her very core, its timbre threatening to vibrate her knickers off, " . . . to fix your washing machine."
"Oh god!" she exclaimed breathlessly, "I was just going to have a bath." She looked at him askance, and he looked back at her askance as well, "In the nude!" she elucidated.
"But I have already brought my enormous plumbing tool," he waved it back and forth in front of her flushed cheeks, its hard, unforgiving length still glistening from another lady's fluids.
"My!" she gasped, admiring his professional manner. "Then it would be a shame if you got it out and didn't get chance to use it."
"I will be very . . ." He leaned forward, lowering his voice even further as their eyes met, his gaze smouldering like slices of black pudding in a frying pan " . . . quick."
"Good." she whispered back, relief flooding quite literally out of her, and she led him into the bedroom where she kept her washing machine.
"I keep my washing machine in the bedroom." She told him.
"That is completely normal and requires no clarification." He smoothed his moustache down and wiped his brow. "It's a little hot in here." He pointed out unnecessarily. "Would you mind if I made myself a little more . . ." he paused as he unbuttoned his shirt and searched for a word, " . . . sexy."
"Why not at all." She replied. "It is very, very warm in here, and me wearing this hot, winter silk negligee as well." She shrugged it off, but left her high heels on for the purposes of decorum.
"Now," he knelt before her and raised his tool in front of them both, expertly manoeuvring it into position. "Let me at it."
"That's it. Right there" She showed him. "Yes. There. Right in the alcove. That's it. Right there."
"Yes, I can see it because it is quite large, it being a washing machine."
True to his word, he was expertly quick, finishing rapidly and then holding up his tool wot was all covered in white residue.
"You see, the problem is you haven't been descaling it, and it's a bit like a kettle in that respect, so perhaps you should use Calgon."
"That's really very efficient of you, and reasonably priced as well. Thank you very much,"
"You're welcome." He cleaned his tool on the bedroom curtains before making his way to the van, leaving another very satisfied customer in his wake.
A few days later they met in the street, swapped numbers and went on three dates, which culminated in some satisfactory sexual intercourse and began a pleasant relationship lasting almost two years before ending relatively amicably.
Actually, forget the bad sex awards, this stuff is pretty hot.
Sorry it was so short.
Posted by The Jules at 2:57 PM 19 comments:

Roll Me Over, In A Rover

Thought I'd do a quick ambulance related post, because I spend so much of my life in one.

Got called to a crash a few weeks ago and, after the (luckily minimally injured) patient had been packaged up and sent off to hospital, I took a cheeky couple of snaps in the name of blogging reflection and learning:


This is technically termed a "roll over" for mysterious reasons that elude me. It had narrowly missed a snack van in a layby where a queue of people were treated to the alarming spectacle of a car doing some acrobatics just a few metres away, before coming to a rest in a ditch. The driver then got out and staggered around for a bit holding his neck before we managed to catch him and stop his head falling off with some judicious immobilisation.

Okay, so he wasn't really that badly injured. The use of the spinal collar, full body vacuum splint and seven or eight large bore cannulae in his jugular might just possibly have been a teensy touch over the top, but you can never be too sure with this sort of mechanism of injury. Also I need the practice.

But what could possibly have caused such a loss of control? The driver swore he wasn't going too fast. He wasn't over the limit, hadn't taken any drugs or medication that could have affected his driving, and had apparently simply turned the corner and lost it. He seemed genuinely upset that he had been so unlucky, as he'd been driving for years and never had an accident before.

We made sympathetic sounds and told him, at the end of the day, he was still talking so there were reasons to be cheerful. He wasn't overly receptive to our pleasantries though and I suggested that, sometimes, you just had to chalk these things up to the vagaries of the universe.

It's a mystery, beyond the ken of mere humans to solve, completely unfathomable and utterly unpreventable

At least until you looked at his tyres:

When I left the scene, the unamused police were heading off to the hospital to see the driver. On the way, they told me, they were going to find a nice heavy book to throw at him.
Posted by The Jules at 11:50 AM 17 comments:

Maybe not fnarples, thinking about it. That's for a different celebration.

But still, Halloween, properly de-apostrophised and bulging with the promise of hollowed out vegetables and obtaining sweeties through extortion!

I now have children, which sort of curtails most things celebratory that I used to enjoy, such as meeting other adults and having a conversation about something other than Teletubbies and poo, unless we wanted to. This means that if I see an opportunity for some gregarious celebration, no matter how infantile and pointless, I will grab on to that sucker like a politician on to an expense account.

At one point in the afternoon, my son clocked the digital camera on the sideboard and immediately had a great idea. "I want to take some photos Daddy!"

I was unsure. The last time he'd used it I had to spend ages with a tiny alcohol wipe cleaning raspberry jelly off the lens so people didn't look like they were being eaten by the Blob in every shot.

"Puh-lease can I take some photos Daddy!" He held his hands together in front of his chest out as though praying, knowing very well that I can't resist that sort of supplication. Besides, I thought, it's a distraction, and raising children is all about distracting them. And feeding them occasionally.

I set the camera up and handed it over.

"Find something interesting to photograph." I advised, removing a sticky finger from the delicate lens mechanism.

That's the sofa, close up. Fascinating stuff. Look at the weave. And the discolouration. It shows the beautiful cycle of stains and stain remover, forever chasing one another down the years.

"Not the sofa. Something interesting." I remind The Boy. 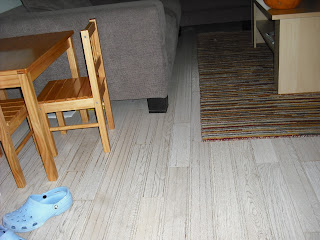 A bit of living room, with the wife's crocs just scuttling to get out of shot. Hardly the stuff of award winning exhibitions.

"How about the pumpkins I just spent ages hollowing out and carving?" I suggested.

"Maybe not quite so close up son."
"Okay."
Snap:
"Bonobo, please stop eating the pumpkin."

The doorbell rang. Great stuff, I thought, and suggested a photo of the visitors might be interesting. 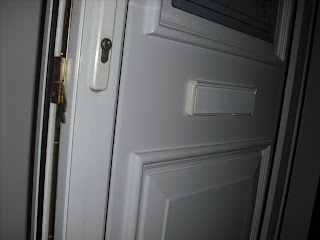 Yep, visitors, nearly as interesting as the door. 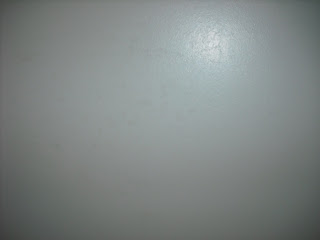 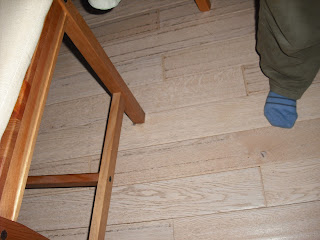 The Boy bounces around the house, so excited to be taking pictures he is actually vibrating which makes him both hard to see at the edges and quite difficult to catch. I eventually trap him with a cunningly set up photographic opportunity of his old man. Predictably,  he can't resist. 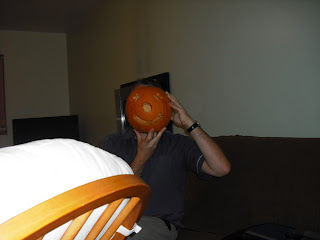 Looking good. I point him in the direction of the pumpkins which have been put on display ready for any passing art critic, and we finally have a picture taken from the viewpoint of a four year-old.


I borrowed the camera for a moment and looked at the pictures on the little display. The ones shown here are the pick of about fifty, mostly of walls and floors, with the occasional door thrown in for good measure. I heartlessly deleted them and then handed the camera back, whereupon The Boy ran off to continue his reportage.


And his sister begging for a go, or possibly a chew, on the camera: 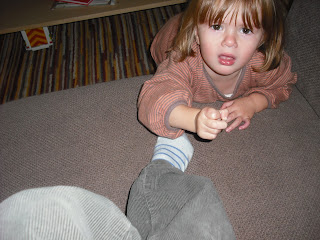 Before she finally feigned disinterest: 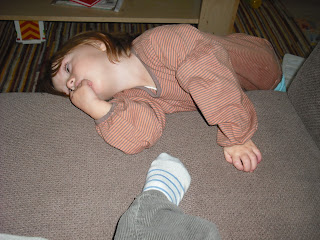 Eventually, the novelty wore off, and I managed to retrieve a surprisingly clean camera for some judicious memory wiping. A couple of them were actually rather good, and I think we can consider getting him his own camera for his fifth birthday in March. They do relatively cheap, tough ones that are ketchup proof nowadays and just right for little people to take photos anywhere they want.

I think I'll have to put a lock on the bathroom door.

We got The Boy ready for the party and, before we drove him to his friend's house, he was quite willing to step in front of the lens for a change.