I really didn't want to turn this into some sort of parent-y blog, because there are lots out there better at it and far more gooey than what I am. Unfortunately, at the moment, it's all I know . . .

So apologies, both for the lack of posts and the repetition of this theme, and I will understand if you decline to read on because you're missing intellectual discussions on mobility scooters, floating leaves, boobs and toilets.

If you're still here?

I loved that feeling. Still do in fact. These days, I'm usually able to get myself to sleep, eventually, although I do still find it hard to "switch off" as people who are very good at kipping tell me you're supposed to do. When I do that, I concentrate so hard on switching off it perks me right up.

Anyway, eventually, I usually manage to find the appropriately monotonous thought routine that bores me into submission, and off I go.

When you are tiny, you often need a spot of help, and that is often the sounds of your parents' voices, either reading to you or just general chit chat.

That's a bit of a dilemma for a parent, because you want to get them off to sleep, so you use your most soporific of voices, and read The Gruffalo in a quiet and surprisingly camp lilt

But what if it's not necessary?

What if you can just witter on about the days necessities and still get them off to sleep?

I remember, if sleeping in the car or somewhere, how nice it was hearing my parents' voices, not even quietly, chatting away about how fags had gone up to 50p a pack and it was health and safety gone mad, whatever health and safety were. You could happily drift off knowing they were nearby, and you didn't care what they were talking about, or even if you could hear the words, as long as they were in the near vicinity, just as long as they were there and you could safely have a kip.

Your mum could've had a voice like an eagle on helium, but you'd still be able to fall asleep listening to it.

Nowadays, I am the baritonic rumble that helps send my baby off to sleep. It's never when I'm trying to get her off, but only when I happen to be walking her around, or pushing her in the buggy and chatting quite normally, when suddenly I notice she's zonked out, snoring gently into a pool of dribble on my shoulder, or slumped forward with head at a disconcertingly trachea-warping angle.

Then, I change to a whisper and immediately, she wakes as if thinking I must be talking about her. Which is possibly the case.

It's not just voices either. Stick on the Hoover next to her head, and not a peep. Rustle a piece of paper in the next room and her eyes spring open like the guard in a jail just as your about to steal the keys off of his belt.

I wonder if this is an evolutionary trait, in that loud noises nearby are most likely simply everyday things going on, and present no danger, but the quiet rustle of a leaf or gentle snap of a twig could very well be a big hungry, toothy thing sneaking up on you.

There'll be a paper on it somewhere, by a scientist with an interest in babies getting eaten.

Whatever it is, it's nice when they drop off and, despite my theory that I could talk at normal volume with no ill effect, I still creep around her like a particularly nervous ninja, even though I could possibly just carry on stomping around singing Amarillo in a croaky falsetto.

But still, would you want to risk disturbing this: 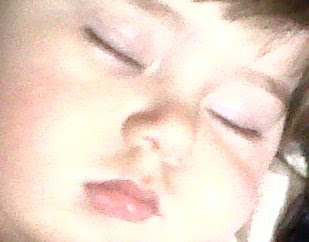 Eddie Bluelights over at Clouds and Silvery Linings, a blog which blogs about blogs, bloggily, has decided that I needed to be awarded.

The award is rather touching, naming me as a Versatile Blogger, which makes me feel a bit like a Swiss Army Knife, able to unscrew a bottle of plonk and get boy scouts out of horses hooves with my various stainless steel appendages.

I get a picture! 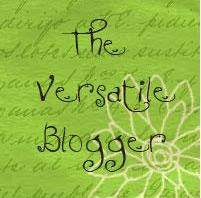 Eddie himself was rightly awarded this title, and being the dutiful blogger he is, appropriately read the small print and adhered to the rules with genuine gusto and a diligence usually found only amongst the most succesful of traffic warden.

In order to appropriately qualify for this award, I must reveal ten things about myself and then nominate a number of bloggers who I think will be up to the task of meme-hood.

Now, correct me if I'm wrong, but I don't see BAFTA or Oscar winners having to perform tasks for their awards, but apparently I have to work for this one.

The first part I can do, although I feel it would be richer for the reader if I used the all forgiving medium of lies, but as it is I will tell the truth, because the source is an honest sort of chap.

They might not be interesting, because I've told you all the interesting things about me on this ego-fluffing medium I call a blog, but awards don't care about that! They just want wordy toil.

1. When they phone, I enjoy asking telephone call operators in Mumbai what the weather is like there at this time of year. The answer is invariably "Hot", "Wet" or "Hot and wet".

2. Today, I was wondering whether if you had no thumbs, you would be best wearing a poncho as there aren't any buttons on it.

3. Fridays are my favourite day for no other reason thant they are named after a lady called Frig.

5. I can't get my head round the idea that before there was the universe, there may have been nothing, not even space. This makes the space between my ears ache.

6. I can't decide whether or not I like wearing pyjamas.

7. I sometimes use my pet house Rabbit, Bert, as a paper shredder.

8. After slagging of African redbush tea for years and years, saying it smelled like something a large carnivore with kidney problems might use to mark its territory with, I quite suddenly and unexpectedly like it now.

9. I really would rather like a banjo, and I'm not quite sure why.

10. I once spoke a damn decent amount of Spanish, and have managed to forget most of it, which is pretty unforgiveable really.

There you go. A scintillating glimpse into the inner workings of The Jules. Bet you're glad you asked now, eh?

As to the second part of the award, I feel it would be unfair to dump a meme on poor unsuspecting, innocent folk, minding their own bizz-nizz, and expecting them to jump just because I shouted "Frog!"

Actually, I would like that, but I'm also painfully aware that the ones I would like to choose are often on the receiving end of similar awards and memes and such-like, so I'm going to be kind and give them a break.

Kindness is versatile right? Sometimes it lets you be cruel.