Simply the Pest! Petter than all the rest.

I recently wrote a post from my time as a pest controller where I discussed a lady's fear of cockroaches. Phobias are always good to hear about as they are both cruel and funny, like giving Kendal Mint Cake to an elderly aunt with badly fitting dentures.
It reminded me of a time when I was contracted to clear a particularly impressive rat infestation from a farm in deepest, darkest Berkshire, where racehorses roam freely from sauna to hydrotherapy pool, where tiny, rich ex-jockeys from Ireland stare up at you and hope you haven't noticed their pointy, pointy ears, and where people who pop the collars on their polo shirts in the unfathomable belief that it's cool drive "Discos" or "Scoobies" which are always, without fail, green.
Occasionally, in amongst the unnaturally flat fields of the racehorse training grounds, you might come across a real, proper farm where they grow crops and worthwhile, useful animals like cows and pigs.
Don't get me wrong, for these farms are very different from the olden days where, heaven forbid, a real, actual farmer would own and live on the premises. Here, the farms have been bought out by large companies that have converted the buildings into desirable barn conversions that local people can't afford and, for the crops, send in a locum farmer a couple of times a week to make sure things are still alive. For this reason, any old farm buildings can become quite neglected and a haven for pesty critters.
Here was a good example of a wide-spread infestation left to run riot for many years, and centred on a dilapidated old barn once used as an animal feed store.
I considered contacting Bonzo for some mercenary assistance, but he specialised in battles, and this was a war. Also, he didn't like coming down past Nottingham because he thought the cops would be on his tail. Literally.
The substitute farmer met me on site as I arrived to set up the pest control measures (which consisted of, in technical parlance, a shit-load of poison). Once again, I was treated to someone eager to tell me about their phobia. I'm not sure why. I must look like I'm not going to take advantage. Here, the farmer said he didn't like rats. Properly didn't like them. Brought him out in cold sweats.
"What about you?" he asked.
"Me."  I scoffed, "Nah. I've got no phobias."
"Really?" he asked, genuinely interested. "None at all?"
I thought for a moment and shook my head. "Nope," I boasted, "No phobias. No fears. No panic attacks. No anxieties. I have a psychology of steel. I wouldn't even flinch." I wish I chewed matches so I could have taken it out of the corner of my mouth, before saying "You can't. Not in this line of work."
Being twenty-five and enthusiastic, as well as being less likely to chew matches because I might get a splinter and, you know, mouth ulcers are ever so, ever so sore, I proceeded to give him a demonstration about why it wasn't good to be too scared of rats, because they were everywhere in a place like this. I thumped the corrugated iron cladding on the side of the barn wall in which we were standing, and was rewarded with a huge amount of scuttling and running as the hordes of rats behind scrambled for deeper hiding places.
Unfortunately, one of them decided that a better escape route would be from a hole in the cladding above my head, where it leaped to freedom, landing on the nearest available tall thing in the vicinity. 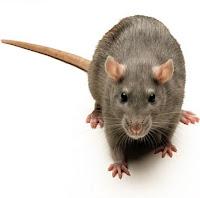 Me.
Or in particular, the bit where my head joins my torso. I believe it's called the neck.
I may have shrieked.
In fact, I may have made a noise that I wasn't even aware I was capable of making since before puberty, so high-pitched with surprise that all dogs within a two mile radius sat up and wondered who was whistling.
"Golly!" I said, (or something similar) "Look at that one!" I pointed as it ran down the entire length of my body, jumped to the floor from knee height and rushed back to it's peers behind the wall. I turned for moral support to the farmer, only to find an empty space echoing only to the sound of running foot falls outside.
He wasn't taking any chances, he later told me when we met up later for a cup of thermos-cool tea and a sandwich, as he didn't want anything like that happening to him, demonstrating a strange take on working-class solidarity.
Although I may not have developed a fear of falling rats, I did from then on show a healthy respect for overhead infestations, as well the leaping ability of our furry friends and the overatedness of thermos flasks.
Posted by The Jules at 12:30 PM 18 comments:

Warning! Ambulance related post! And possibly a bit of a rant too. Avert your eyes if you must.
Recently, I was called to a man threatening to jump off a motorway bridge, hanging precariously from the outer edge, one foot dangling and white hands grasping the rail with a shaking grip. The police asked me to talk to him as he was only willing to talk to a (neutral?) paramedic, and the police negotiators couldn't get on scene for another 45 minutes.
I called upon all my negotiating training (i.e. none) and proceeded to have a chat.
At one point, quite early on, he really looked like he was going to do it. I mean a proper 'This Is It' look of resigned defeat in his eyes. I decided that this wasn't due solely to my conversational style (although it wouldn't be the first time) and I adjusted my stance accordingly.
Once, not even that long ago, I might have stepped in at that moment and gone for a securing bear hug. There is an inherent risk in doing this as they can take you with them, and no-one will ever think less of you for not doing it. In the old days, it was a risk that I might have deemed worth taking.
Now, I'm not so sure.
My baby daughter is sitting on my lap as I type this with one hand, giggling and eloquently reminding me exactly where my priorities lie.
Instead, in this case, I braced my foot against the base of the railings, examined his jacket, identified a suitable hand-hold and resolved to grab it and it alone, should he do a very mediocre Superman impression. I reasoned that, should the worst case scenario occur, I would have a reasonable (but admittedly reduced) chance at preventing a plunge, but wouldn't succumb to being dragged over the rail and onto the carriageway below.
And to anyone who might say that this isn't enough? Well, tough titty. I'd rather have to explain to a coroner why I didn't put more effort into saving someone than have someone else tell my wife that she needs to find another sucker partner to help pay the bills and look after the kids.
Of course, this might sound like a straw man argument, because who in their right mind would suggest a rescuer put themselves at undue risk when on duty?
Well, the coroner involved in examining the recent Derrick Bird massacre, for a start.
I wouldn't usually post a link to the Daily Fail, what with it being a right-wing homophobic, racist rag with the moral compass of a blood-hungry mosquito, but the headline is a grabber.
There is an old saying that a good rescuer is a selfish rescuer, in that they shouldn't do anything that turns them into just another casualty. Complete emotional detachment is neither possible nor desirable, but neither is getting so involved that you become of no use to the patient, and possibly just a drain on already stretched resources.
I wonder what the coroner's judgement would have been had a member of the emergency services gone in and been shot as well, especially if it subsequently turned out the original victim had been beyond help anyway.
Who would thank me for getting myself killed or injured trying to save someone else? The victim? The victim's family? My family? My employer?
We take risks all the time in this job. In the unfamiliar, dark house with the only information being "He's been cut!"; in the nightclub toilets where someone has been beaten unconscious; at the industrial accident where unfamiliar machinery is still running, or to the extremely well-known patient with a tenuous grasp of whether or not he's allowed to hit ambulance crews.
Often, with single occupant response cars being de rigeur at the moment until the media discover what a cop-out it is, we do these things alone, at night, with our hands full, and with only the briefest of information about what's been going on passed to us via the radio.

We make a decision, depending on whether or not we think the danger outweighs the response, on our familiarity with the location, on how we're currently feeling, and we hope out decision is the right one, both for ourselves and for the patient.
From a personal point of view, a victim apparently dead from a shotgun blast with the killer still possibly on scene is not something I would attend without armed police securing the area first.
If this is construed as cowardly, or health and safety gone mad, then you can colour me yellow and stick a Slippery When Wet sign on me, but at least I'll have a higher chance of going home at the end of the shift.
It's not something I feel the need to apologise for.
And the man on the bridge?
Well persuasion, and a graphic description of what injuries I would have to treat should he quite feasibly survive the drop, led to a happy (for us) conclusion, in that he decided to let me help him off the ledge and into a warm car, for a chat with the negotiators.
I think we both made the right decision.
Rant over.
Thanks for listening.
Posted by The Jules at 8:02 PM 20 comments:

A standard conversation with a 4 year-old 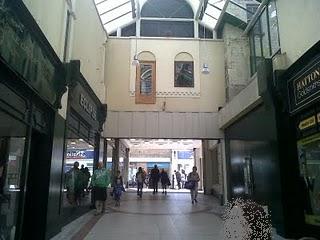