Christmas time, and I'm off, which makes a decent change.

Doesn't seem a year since I was lamenting being at work over christmas, but it was!

This year, however, I am of a different ilk, and can join in the festivities without the possibility of having to zoom off to have my mood ruined by someone selfishly having a heart attack or taking an overdose on this most joyous of of days.

Now, There is actual, genuine snedge outside and the kids are gradually coming down from the excitement of evidence-less faith in a big fat guy who lobs toys down your chimney even if you haven't got a chimney. As well as sugar.

Presents have been given and received, telly has been watched, dinner has been eaten and the traditional bicker has been attended to. Both stomachs and marriages are close to splitting, which is the official sign of a successful traditional exmuss.

My son, who is a few months short of his fourth birthday, turned his nose up at the stonkingly good home made beef wellington with all the trimmings, and opted instead for a Babybel cheese and a slice of bread (no butter) for his christmas dinner.

This is actually better than might be expected because, if it was his choice, the christmas menu would be something like this:

Dessert: Minstrels crumble with custard. Made out of Minstrels.

This would of course be followed by a nice cup of Minstrels to finish the meal off. And maybe a quick look at the Minstrels board.

I've flicked through the films, and was quite excited about Shrek the Third and Top Gear, but in general I'm not overly bothered about telly. This is good because, well, let's face it, the TV selection is pretty crappy, and that's even with the most up-to-date supermarket freesat box. The Queen's Speech wasn't even done by Helen Mirren. Just some old granny in a bling hat.

Mind you, I would've been more excited about even the most straight-to-bargain-box-in-Blockbusters offering if the synopsis was like the one I saw just a couple of weeks ago on Movies4Men: 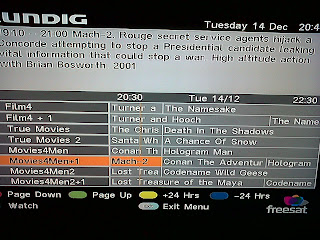 Rogue agents are ten a penny. In fact, the majority of secret service agents are rogue. And that's political dynamite, that fact.

Rouge agents though? Well, they're a different breed altogether. Not only are they charged with hijacking Concordes (presumably by going to an air museum and towing it out), but they must do so looking fabulous!

Now though, in the here and now, things are quieting down. Peristalsis is overcoming what initially seemed like a insurmountable obstacle and now just looks more and more like a big job, whilst alcohol gently caresses my system like a cerebral Thai lady-boy with well-oiled hands.

So I have a moment to reflect.

Yup. That's some good reflecting there.

Anyway, let me take this moment to wish you a very happy Saturday, and please spare a thought for all those who have to work over the weekend.

Happy christmas.
Posted by The Jules at 9:02 PM 16 comments:

I got pestered by some mates into joining Twitter, which I duly did being a modern, technomological sort of person, interested in the relatively new phenomena of social media and cyber-gregariousness that now pervades our society like a funny smell you can't decide whether or not you like, encouraging us to become "friends" with people we've met at a bus stop and are unlikely to ever see again.

So, there I was, Twitterised.

Of course, I obeyed the law and became a follower of Stephen Fry, because I believe that's compulsory and there may very well be some sort of penalty for not doing so.

I read other folks tweets. Some were quite good, or informative, or interesting. Most were banal. I played around with it, tweeted a few times, even twittered occasionally.

But I have to confess, I don't really get it.

To me, other social media makes a sort of sense. It's great for sharing photos with far-flung family, of arranging rare nights out, and for generally having a regular natter when otherwise you might only talk to someone every couple of weeks on the phone. It really is quite social.

You post a sentence. It gets displayed for a while. You write another one. Done.

And for the number of people that are going to read mine, I'd be better off writing them on a Post-it and sticking them to my fridge door.

I decided to cheat and directed my Facebook statuses (Statees? Stati?) to become tweets, so I look like I'm a dedicated Twitterer, when in fact I only occasionally look at it. This way, Mr Fry's loyalty enforcement officers won't come after me.

I do get notifications when someone new follows me, which is all very well when it's a friend or acquaintance, but most of them seem to be businesses including, strangely, a Japanese Garden centre.

Lately, I have been experiencing a sudden surge of new followers on Twitter. At first this excited me because, suddenly, people were showing that they liked what I was saying and wanted to know more! Coincidentally, they all seemed to be ladies with a penchant for naturism, for their avatar pictures were often bereft of clothing.
Amazingly, Yasmine, Constance, Celeste, Ebony, Sexxy69 and DickLuva all turned out to be less than genuine, and were in fact spamming for business in order to drum up trade for mucky films.
Apart from the copious displays of bare boobs, their expressions should have clued me in. Half closed eyes and slack jaws are, it would seem, the industry standard "look" to demonstrate sexiness, and totally not indicative of an over-enthusiastic lobotomy.

Anyway, I've blocked them on grounds that pictures of naked ladies are actually available on the internet, if you look hard enough.

So I've been told.

And then I promptly got another one. Just before I blocked her, I couldn't help but notice her name.
In such an industry, market research would, one presumes, suggest using an alias that might be judged "sexy", a name to tempt a potential Joe to view your wares, a nom-de-pute if you will. This isn't difficult, as you could just use those ones associated with contemporary screen lovelies, maybe Angelina or Nicole, Kirsten or Eva. No imagination needed.
Here, such market research had obviously passed my new fan by.
Her name was Mildred.

Now, bad as I feel about labelling people, but when I think of someone called Mildred, it isn't in the context of sexual relations. Apologies if your name is Mildred and you're reading this*, but it really doesn't rank high in the annals of eroticism, does it? The image that springs to mind is of someone with removable teeth.

I wonder if you were a chap in the market for some negotiable affection, would you pay less if your lady of the night was called Doris or Edna?

I may be over thinking this.
Initially, writing this made me feel a bit shallow, and possibly sexist against men for not including them in this diatribe. But maybe the opposite is true. Genuine desirability depends on subjective impressions, the recognition of humanity, the identification of (and maybe with) a real person, not just on plastic pertness and a gormless physiognomy, lovely though those attributes must obviously be.
A name is important.
Of course, the popularity of any name changes from one generation to the next, so todays Angelinas will be tomorrows Myrtles, and the height of allure will one day be represented by Maude, Ida and Mildred.
Anyway, with that tangent well and truly offed, I deleted Mildred and exited Twitter for a few weeks. I'm obviously not exploiting it to its full potential, which may be my fault, but I also don't seem to have the urge (or indeed the time) to learn how to.

Ultimately, blogging may have ruined Twitter for me, because why would I want to tweet when I can squawk? 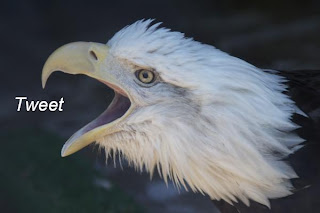