Recently, I decided to have a spot of body modification done. Just a bit of work, not a lot. A nip here, maybe a tuck there, a stitch to hold things together. It's all the rage apparently, and lots of men have it done. Less women, for some reason.

I've had a vasectomy.

When I was in my twenties, I had a friend who was so adamant he didn't and never would want kids that he decided to get an 'ecotmy under his belt. He was a bit miffed that he had to undergo a few months of therapy and counselling to be certain he was one hundred percent sure, until the medical authorities responsible reluctantly agreed and allowed him the procedure.

This led to many years of hedonistic sex with a variety of interesting people, of which we as his peers were understandably envious. Ultimately, his newly acquired freedom resulted in a rather nasty dose of an STD that finally turned him into quite the advocate for condom use.

I wonder if the irony was a painful as the pustules.

So, as I approached my GP with my request, I had my arguments and rationale all sorted out in my head, rehearsed and prepared. The subsequent conversation went like this.

Me: "I'd like a vasectomy please."
GP: "Okay." Gets paper out of drawer. "Sign that consent form and I'll book you in."

Apparently, being forty with two kids does not elicit the concern warranted to younger testicles with more breeding potential.

So, last Friday, newly shaved and proud as a naked mole rat with a particularly good bean bag, I visited the surgery to be met by Nigel, a doctor I have spoken to at work on many occasions, who shook my hand and then fondled my nuts.

And this was just in the waiting room! Aha!

I went into the little side room where a nurse asked me to strip from the waist down, which I duly did. I also took off my socks, although I'm not sure why. Then Dr Nigel came in, talked me through everything and off we went.

And that was it. The initial injection smarted a bit, but after that it was simply a bit of tugging (not in the good way) and the very odd feeling of being able to watch bits of my own innards being exposed, cut and cauterised whilst I propped myself up on my elbows for a good view. It was all less traumatic than I thought it would be.

Nigel pointed out that I would be battered and bruised for a week or two, and to do absolutely nothing for the next couple of days. The nurse was very, very strict about this, lamenting the time she went to Tesco's after work and found a man who had had a vasectomy not two hours before doing his weekly shop.

Apparently, his whole lower body from the nipples down withered and died as a result, leaving him but a sad husk of a man, disconsolately wheeling his torso around on a skateboard muttering the word "plums" over and over again and being unable to satisfy his wife.

I suspect exaggeration, but I wasn't going to take any chances, setting myself up with baby sitters for a couple of days who were invaluable, allowing me do little else except watch films, look at Twitter and read blogs and words on my Kindle, which are a bit like books only made of electric.

I had also planned to do some blogging myself, but the combination of pain-killers and lethargy just isn't conducive to any sort of creative thinking or artistic endeavour, hence the dearth of posts over the last three weeks or so.

Four days later, and I took the single stitch out, realised the wound hadn't completely closed yet and glued it shut again. I've now got a bit of an ache and am still walking like I've lost my horse, but in general things seem okay, especially with the copious ingestion of over the counter analgesics.

So far, so good and, although the bruising is a bit disconcerting, I'm glad I've had it done. Seems only right that a chap take charge of his fertility after years of relying on prophylactics, female responsibility and brewer's droop to prevent babies.

What's that? You want to know about the bruising?

Of course you do. Everyone does.

Well, I like to think of myself as a subtle writer, delicately weaving gentle strands of description, using misty metaphor and ephemeral prose to entice the reader into using their own imagination to get my message across. I feel this is a skill I can transfer to the pictorial realm, and I shall bring such an abstract photograph to you now to describe the results of my procedure: 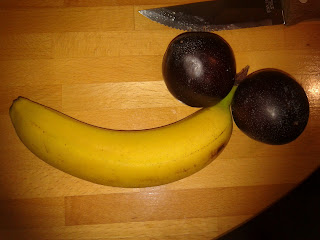 Do not worry if you don't "get" it at first. Dali had similar problems, but if you mull it over a few times, maybe discuss it with an educated friend or intellectual colleague you will, in time, understand my allusion, and your appreciation of it will be all the greater for having had to work at it.

In conclusion, ball ache is such a ball ache.

Once again I find myself trying to dredge up a spare crumb of time to blog amongst the chaotic and relentless responsibilities that comprise modern living. This is a pity because blogging is one of the two things in life I find pleasurable.*

Sorry, I don't mean to moan.

I  appear to have reached that age when it becomes almost enjoyable to complain. I don't know if this is a phenomenon that occurs to everyone at a certain time in their life but it's happening to me. Half the time I'm not even after an apology. There's just something very satisfying about having the moral high ground for a while, even if you've been inconvenienced, be it by dodgy service, an undeserved rebuke or, as happened to me recently, a parking ticket for somewhere in Enfield, London, for a car I don't own in a place I've never been.

Ooh I enjoyed that phone call. It was marred only by the efficient and polite retraction and follow up apology letter by their annoyingly helpful staff.

Recently my sense of exasperation has become more sensitive and, like an allergic reaction to repeated bee stings, I get all flushed and raspy with just the slightest exposure. Stuff that once I would not even have registered grabs my attention and makes me tut with barely contained fury.

Since when have two things been a collection? You wouldn't get many visitors to the Natural History Museum if you only had two fossils in it. The Louvre would be less the major attraction were it to contain just a pair of pickchaz (although the tour would be nice and quick allowing you to rapidly tick off 'culture' on the compulsory Parisian itinerary and move on to spitting off of the Eiffel Tower).

No, two things do not a collection make. If they did, everyone could have collections. Look at my collection of eyeballs. I keep them in my face. Do you like that kidney? It's part of a collection. This penis? Well, have I got a surprise for you.

Here's a collection of slippers I bought during the same trip to our local supermarket:

I've never had slippers before. It seemed the sort of thing a forty year old man should have, so I bought some.

Despite suddenly having warm feet first thing in the morning, I'm still undecided on the whole slipper issue. There are aspects of slipper etiquette I am ignorant of. Am I supposed to wear socks with them? Do I have to take them off before I put my feet up on the sofa. If you put the bins out and keep your slippers on, do they immediately become outdoor wear and thus unusable in the house? How hard are you meant to spank someone with them before it is construed as assault?

Mysteries as deep as the meaning of life itself.

The particularly sharp reader may have noticed, despite the seamlessly smooth transition of  subject using the literary trick of writing down words, that I have moved away from complaining and on to slippers. This is not a non sequitur because they are linked by an underlying thematic scaffold of age.

Another thing that isn't now a non sequitur is this drawing I saw in one of my children's books:

Those of you who have delved into the murky depths of the Gravel Farm will know I have an interest . . . no, a passion, for out of context pictures, especially published ones that demonstrate questionable appropriateness for their readership, be it the bloody groin of a sheep or the  tail ramming shenanigans of Little Bo Peep.

At least this one doesn't involve sheep.

The fun is trying to guess what the underlying story, if any, could possibly be, or perhaps making up your own. It's better than Sudoku for keeping the cerebral hinges from seizing up.

I recently discovered that out of context hilarity is not just limited to modern times. In our local village hall is a replica of a section of the Bayeux Tapestry, where French seamstresses celebrated a spat between a couple of royal ponces called Bill and Harry:

Rather than discuss the unfairness of how the undeserving upper echelons of society dragged (and still drag) the lower classes into their sordid little affairs, which would probably take at least two paragraphs to fully investigate, I would like to point out that the central, trouserless figure has a dogs paw on his genitals.

I think we can all agree on that at least.

Yes, I think that's covered everything I set out to at the beginning of this meticulously planned post.