Apologies for previous email. I appear to have been spammed from Chile, according to Yahoo security.

Sometimes, when using the works equipment, you realise that the designers really did have your best wishes at heart:

This morning, I was doing my VDI, which sounds like it should involve a cotton swab and some wincing, but is actually a Vehicle Daily Inspection, and took a pickcha, because it puts off changing the defibrillator batteries for a minute which is, like, so boring and who needs 'em anyway:


At first, it looks like the normal chaos one finds in the back of the standard rapid response vehicle used by ambulance paramedics the world over, but take a closer look and you can see they have specifically provided a perfectly engineered nook for my cup of hot brown:


If that doesn't encourage one to be extra thorough in checking your kit then I don't know what will. Anyway, back to work. Probably shouldn't be blogging on duty anyway, but there you go.

Showing my superlative organisational skills, both of my children were born in early March (round of applause please, folks. Thank you. Thank you very much. Nothing like receiving a big hand for your testicles).

In anticipation, my soon-to-be-six year old son has been preparing for his birthday since Christmas, because nothing puts you in the mood for getting presents like receiving gifts. To be fair, his Christmas requests were relatively moderate; an accordion ("NOT a concertina, Daddy!" Well, obviously), a car garage and a pair of castanets, all of which have been duly furnished and didn't break the bank. We ignored his desire for a swimming pool in the garden on the grounds that we don't have a changing room.

For his birthday, he was also quite modest in his desires, wanting only a "spinny disco light". And a shit load of chocolate.

We mused over this for a moment, pleased that it was relatively straightforward but concerned that we might be on our way to having an obese, toothless John Travoltoid as a son. Relenting, because it's not exactly drugs or booze or those joyride-encouraging Super Marilyn computer games that all the kids want these days, we fed a tenner to the ever-giving medium of the internet, and waited.

Happily, the item was delivered quickly (Five stars! Will come again!), and you can imagine how chuffed we were to discover that the very packaging appears to show it was designed utterly with the six year old in mind. 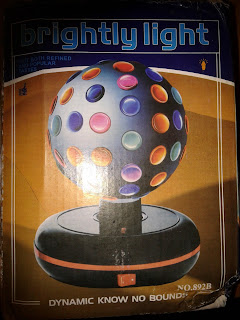 Firstly, it's the Brightly Light model , a marque you can trust especially as this version is the 829B, a vast improvement on the excesses of the 829A, although the  leather attaché carrying case and accompanying dance troupe would have been fun. They've also done away with the diesel powered option and it's plinth is no longer thirty metres across.

One thing they haven't changed is the fact that it's dynamic know no bounds, because why change a winning formula? Dynamic know no bounds could easily be the description for the average six year old child, as demonstrated when one stops running only long enough to ask a fat bloke when the baby's due, or to joyously tell you they've just broken wind and it sounded like an angry hippo.

Clear labelling also informs us that, despite it's many serious medicinal and political uses, this is in fact a faddish present: 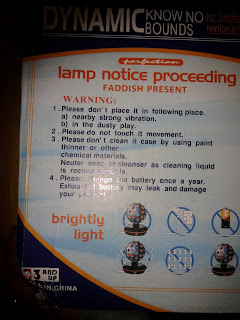 My son is nothing if not faddish. His fads last about a minute, so this is perfect for him.

The instructions seem straightforward. I must remember to avoid vibrations and dusty play, so that's the bedroom out, although it will be hard to stop my boy touching it's movement. For cleaning, I'll check if I've got any neuter soap left over from my vasectomy.

Judging by the traditional lamp hint design it seems simple to operate, as one simply turns on the iridescent glassy orifice with the plinth switch. My first thought on examining it was that it should suit not only my son's refined taste, but also his popular one as well. Happily, the packaging confirms that this is indeed the case: 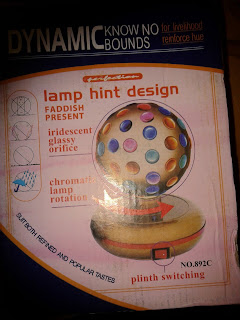 They do use Model number 892C as the demonstration in this picture though, which I hope won't upset my son too much. Especially when I tell him the reason he can't have that one is because he just hasn't been good enough.

For a couple of days now I have been complaining that the nail on my right little toe has been hurting, because I accidentally pulled half of it out and now it's a bit sore.

You might think that this is a minor injury, but perhaps not when I inform you that there was actually a spot of blood when I did it. And the side went all red and swollen for, like, maybe half an hour afterwards.

I say complaining, but not a huge amount because I am, and this is objective fact, super-rufty-tufty, and you would barely notice my limp were I not wailing and dragging the affected limb behind me like a crocodile's tail.

Then yesterday I met a great chap called Paul, in his eighty-ninth year, who told me how he lost an eye in a Lancaster bomber in 1943. He was a front gunner and, after about twenty searchlights cheerily lit up his plane somewhere over Essen, flack exploded in front of them, shattering the perspex of his canopy and sending shards throughout his confined space in the nose. One shard entered his eye, bouncing of the back of his socket and exited via his forehead. The Lancaster limped home, the crew all surviving and he was patched up, with the damaged organ removed and replaced with a prosthesis.

He described how he had adapted well to this because he "had a spare".

Then, in his early eighties, he suffered a stroke, leaving him with mobility problems as the whole left side of his body was affected. Again, he had adapted superbly, walking with a stick and adjusting his lifestyle accordingly telling me "It could have been worse, and I've got a spare arm and leg as well!"

You might not be surprised to learn that I came to understand something of myself after that. Not just myself in fact, but of all of us. Our suffering means nothing to the cosmos. Call it self-realisation, or an awareness of  one's own humanity in the face of nihilism, or maybe even call it enlightenment, but those thoughts took me to a conclusion I had never reached before.

I realised we have a lot in common, Paul and I, because I also have a spare toe.

In this little spark of clarity that we call existence, this flitting sparrow of life flying briefly through the banquet hall of eternity from one dark window to the next, don't we all have a spare toe.

Yes we do.We all have a spare toe.

Unless, you know, you haven't, in which case, sorry about that. Have you tried wearing Crocs?