I've never actually, specifically tried Mongolian throat singing, but for some things you just know you'll be extra good at should you ever attempt them, and that's one of them.

And hunting monkeys with blow darts.

So you can imagine my consternation when, after glancing at the instructions for well over a second, I attempted to create a balloon flower for my offspring and the result wasn't quite the epitome of floral perfection that I'd intended.

Must've been a dodgy balloon. Or too much argon in the air.

Yeah. I'm going with that: 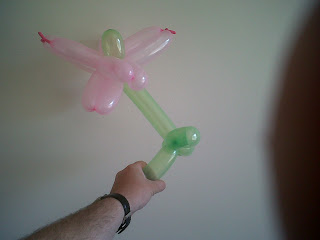 A couple of days ago I was enjoying the blue skies with, for the first time that I can remember, not a single vapour trail from high-flying jets thanks to the Icelandic volcano Eksvskdfmkjhsdfkj erupting and turning Europe into a no-fly zone.

It was quite peaceful.

Of course, there was an underlying current of worry for the UK, because it would've been a perfect time for an enemy invasion, what with our planes grounded and both our naval ships detailed to picking up stranded tourists from Spain. We would have been defenceless, allowing the intruding forces to fly unhindered over our land, to sail into our ports, and to launch their offensive.

Actually, I can't think of anyone who would want to invade the UK anymore.

It'd cost them a fortune, they'd have to take on all the responsibilities of our declining industry, our debts, our crappy roads, our obsession with half-building housing estates, our empty factories and abandoned shop units, GMTV and, not least, our moaning.

We moan a lot.

The only country that might consider invading would be the French, and they'd only do it because it's been a while and they're probably due one now anyway, but they've got volcano-induced problems of their own.

I put those fears to the back of my mind, yet retained a psychological and very British DEFCON 2 status, willing to take on any invading army with a series of loud tuts and an occasional disapproving shake of my head. I then proceeded to enjoy the day.

Giving the missus a spot of peace and quiet so she can feed our new baby without interruption from our son is a daily mission at the moment. So, thank goodness the local council provides playgrounds, which are not just hunting grounds for catholic priests, but also provide much needed distraction for a high-need child with more energy than the Large Hadron Collider.

A couple of minutes of the swings, then on the slide, followed by the see-saw and the climbing frame, concluding with some mad Brownian-motion-like running around, screaming as loudly and as squeakily as is humanly possible, then repeating all of the above until tired, hungry and/or very, very grumpy.

My son is even worse.

I think play parks are pretty standard the world over. Somewhere for the little primates to get in touch with their inner monkey.

Climbing frames are particularly popular, and we've got this battered old wooden one which appears to have slipped the usually all-encompassing net of health and safety compromise: 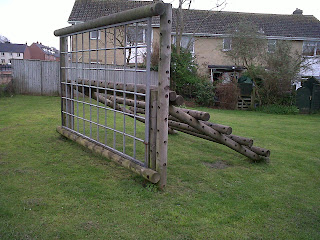 Down in the corner of the neck-wrenching lattice. 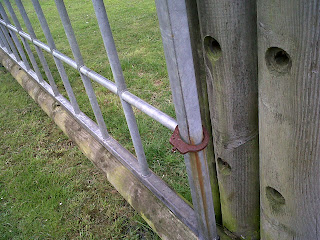 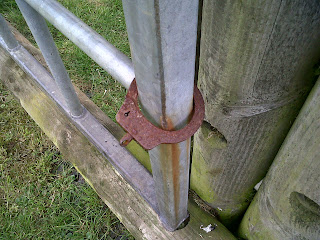 Yep. Definitely a rusty handcuff, which sounds like a euphemism for something I wouldn't want to do.

Maybe in Brazil, but not in South West England.

This seemed a little disconcerting. I'm presuming there is a simple, innocent explanation for the presence of the rusty cuff, such as a naked man the night before his wedding experiencing a spot of affectionate humiliation at the hands of drunks whom, just hours before, he had thought of as his friends.

But it could have been something more . . . blogworthy.

And, with the magical application of imagination, it will be!

I reckon there was an insanely exciting police chase, culminating in one stalwart Peeler nabbing a rum sort, but having no time to take him down to the nick and process him with due diligence and attention to appropriate form filling, what with another shout occurring on his manor, and so 'cuffed him to the nearest convenient metal appliance ready to be dealt with at leisure.

Unfortunately, the resourceful blaggard chewed his own hand off to facilitate his escape. Now, he haunts the swings, scaring children by showing them his bloody, tooth-marked stump, gently swaying to and fro and wailing because he can't hold on very well these days.

Now that's what I'm talking about.

Realistically speaking, policing round here is generally undertaken by people called Police Community Support Officers, who fight crime by being paid half as much as coppers and not having powers of arrest.

I'm also not sure they're actually authorised to do any running.

So, maybe it wasn't that.

Maybe it was a new community-based punishment initiative, designed to alleviate crowding in jail. A bit like community service, where instead of locking them up, you get criminals to undertake a relevant punishment as part of paying their debt to society and rehabilitating them at the same time.

Graffiti artists clean local walls, shoplifters scour supermarket car parks and give any dropped items back to their owners, and murderers reanimate corpses in council-funded eerie castles on craggy peaks.

I suppose you could handcuff a paedophile to a climbing frame, because that would be like sewing up a fat person's gob and then locking them in a bakery.

Punishment indeed.
Posted by The Jules at 1:03 PM 27 comments:

You know when you're on the look out for photo opportunities, perhaps to test out a new camera, or maybe the one on your phone, or just because you're in a snap happy mood, or possibly because you haven't done a blog entry for a while and need to post something, anything, before it seizes up with internet rust and has to be waggled back and forth in a bath of WD40 whilst you try and remember what your old Dad told you about loosening up stiff old blogs, probably?

Well, it can go two ways really, the picture hunt.

First, and this is the dread, nothing at all occurs.

And keeps on occurring.

It's as if the world, in a sudden bout of anthropocentric concern, has decided that, with all the wars, disasters, diseases, accidents and what-not, there really should be a few minutes of inactivity as a sort of time-out so reality can catch its metaphorical breath.

So, for just a few moments, nothing interesting happens at all.

This can be a good thing, because maintaining the status quo is the secret of eternal happiness. Or at least it would be if things didn't change all the time.

So, a static universe can be viewed positively, unless you had your camera at the ready and were just waiting for something out of the ordinary to come along. Instead, you're left with an optical desert without so much as a prairie dog turd to catch your interest.

When this happens, one must take a photo of something anyway:

I like frogspawn, because it heralds the continuation of life, the warming of the year, the beauty of the cyclical nature of the biosphere, a small, encapsulated metaphor for the whole living world. It made my heart swell, the sap rise in my humors, and momentarily I felt at one with my animal brethren.

Then I thought realistically about just how many of those eggs will make it to adulthood and I got all depressed, so went off looking for something else to photograph with the pitiful effort that my Blackberry calls a camera.

There must be something, I thought as I walked through my local park, looking hither, yon, and then hither again for a picture.

And Cthulu bless those rambunctious teens who like nothing more than to torment a disabled elderly man by moving his garden furniture: 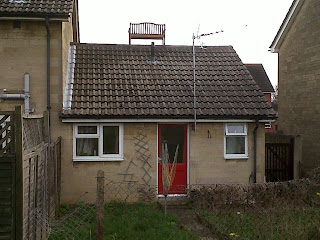 It's not right, but it does make for a good pic.

I took that picture yesterday, and went back today to see the elderly owner has taken to keeping the bench in his living room. It looked like quite a struggle getting it out so he could enjoy the April sunshine and I nearly took another photo for your enjoyment.

However, sense prevailed and I realised that, should I do that, it might not only mark me in an unfavourable light, but it would also mean standing up from behind the parked car I was crouching behind, and he might then ask for my help.

So, frogspawn and a roofiated seat. That's blogworthy I thought, and made my way home, a little sated.

Later, it was time to drive a couple of hours up the motorway to see if the in laws would agree to let the children live with them so I could pursue a life of leisure. I hitched up the child wagon, put in some fresh straw and chew toys, locked them safely in and off we went.

Driving along. I used my phone.

Not for texting or making a phone call, because that is illegal and irresponsible and I cannot countenance anything other than obeying every law and statute passed by our superiors in authority. I even ensure I give the tail of any washed up dead whale I find to the queen, help pregnant ladies relieve themselves into policemens helmets whether they want to or not and, when in the city of York, keep a suspicious watchful eye out for medievally armed Scotsmen.

I was taking a photo, which is far safer, obviously.

This photo is unusual because, firstly, you can actually see some of the tarmac of the M6. Usually, the road surface is completely invisible 'neath a sea of immobile vehicles, noses pressed up to rears like the worlds biggest sycophant gathering.

For any foreign types unfamiliar with the nomenclature of British roads, a motorway is a large three or four lane road originally designed to allow vehicles to travel freely from place to place at 70 mph, but more recently a handy place to keep cars for extended periods whilst their occupants can enjoy entertainment in the form of roadworks.

The other (and main) reason the photo stands out is the cattle truck on the left, which had a song title relating to it's function as a cow transporter: 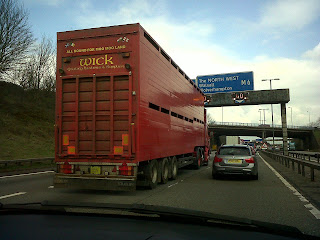 For those of you who can't read it, it says "We're all bound for moo moo land" which is a KLF lyric. Sort of.

Now, I think this is a good idea and vehicles having song titles on their paintwork which accurately reflect their cargo or function should become a modern tradition.

Fire Engines could have Billy Joel's "We Didn't Start The Fire" emblazoned on the side.

RSPCA vans could have "Number of the Beast" by Iron Maiden; Ambulances might sport "Fix you" by Cold Play or perhaps "The Drugs Don't Work" by The Verve.

"Good Riddance" by Green Day could go on the back of bin lorries.

Anyway, you get the idea. I quite obviously haven't given this much in the way of thought, but that's rarely stopped me pursuing daft ideas before so why should I give in now.

Motorway Maintenance Vehicles should be required to have "Highway To Hell" printed on them.

Suggestions anyone?
Posted by The Jules at 6:31 AM 17 comments: